Go back to Tripadvisor 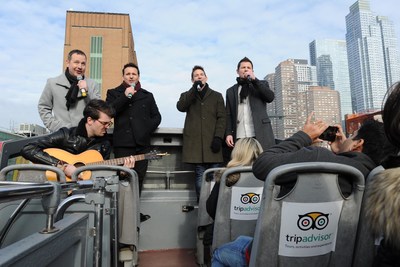 TripAdvisor tour-goers were enjoying New York City's iconic holiday sites including Bryant Park, the Empire State Building and Rockefeller Center but got so much more when TripAdvisor Attractions surprised and delighted them with a performance by 98°. The exclusive tour was led by Gray Line CitySightseeing New York, and the special offer to ride the "Jingle Bus" with a "special holiday surprise" was available to book on TripAdvisor for a promotional price of 98 cents.

To view video and photos of the surprise performance, click on the following link: https://www.dropbox.com/sh/afp1vf58dfa633t/AABlQ9QQSn-efNpi_p_WwcYsa?dl=0

"TripAdvisor Attractions goes beyond the expected giving travelers around the world one-of-a-kind experiences when booking tours on TripAdvisor – and the Jingle Bus concert show is a perfect example," said Brooke Ferencsik, senior director of communications for TripAdvisor. "Having 98° sing aboard one of our most popular New York City bus tours created a magical holiday moment that tour-goers will remember for years to come."

TripAdvisor is home to more than 70,000 bookable tours, activities and experiences worldwide to help travelers unleash the full potential of their trips. Going beyond the traditional tourist activities, TripAdvisor offers consumers one-of-a-kind experiences and access to the world's top attractions.

As a special surprise for ticket holders, TripAdvisor Attractions asked multi-platinum recording artist 98° to perform a selection of holiday songs from their new album Let It Snow. The band's first full-length album in four years, Let It Snow was Top 10 on Billboard's Holiday charts and has become a staple on holiday playlists. Let It Snow is their second Christmas title featuring the group's signature R&B-tinged, four-part harmonies and follow up to their critically-acclaimed, multi-platinum album This Christmas released in 1999.

Here are 10 of TripAdvisor's Top Holiday Tours in NYC:

Head out to Dyker Heights and Bay Ridge, Brooklyn to see Christmas decorations that cannot be missed. On the way back, enjoy views of the lit-up Manhattan skyline. Plus stop at Fifth Avenue and Rockefeller Center to catch a glimpse of the iconic displays.
Bookable on TripAdvisor from $55 per person

Avoid the crowds with priority access to Rockefeller Center's iconic ice-skating rink for the 8:30 a.m. skate session, including VIP chalet access with complimentary hot chocolate and fresh-baked cookies. Cap off the day with 360-degree panoramic views from the Top of the Rock observation deck.
Bookable on TripAdvisor from $96 per person

Enjoy the spectacular Christmas lights and holiday movie sites in New York City on this guided bus tour. See the exact locations where many holiday movies were filmed, and match them to their on-screen movie clips along the way.
Bookable on TripAdvisor from $42 per person

Soak up the holiday spirit on this 2-hour New York sightseeing tour, including stops at the iconic Rockefeller Center Christmas tree, the festive window displays of Fifth Avenue stores, and the stalls in the magical Bryant Park holiday market.
Bookable on TripAdvisor from $25 per person

Make your way through Midtown Manhattan, where you'll see glittering store windows, colorful bulbs, and beautiful light displays, including the famous Christmas tree at Rockefeller Center.
Bookable on TripAdvisor from $26 per person

6.      Top of the Rock Observatory, Dining, with Radio City or Elf The Musical

Combine quintessential New York City holiday pastimes with this combination package, which includes a visit to the Top of the Rock Observatory and a $50 gift certificate to The Sea Fire Grill or Benjamin Prime Steak House. Additionally, get a taste of holiday-themed stage productions with a choice of the Radio City Christmas Spectacular or Elf the Musical.
Bookable on TripAdvisor from $239 per person

Browse elegant window displays as you make your way to a series of traditional holiday markets, and shop for locally made arts, crafts, and specialty food. Follow your guide to see some of Manhattan's spectacular holiday lights and visit the locations of beloved Christmas movies.
Bookable on TripAdvisor from $45 per person

See Manhattan decked out for the holidays on a 2-hour private evening walking tour that takes you to locations including Rockefeller Center, St. Patrick's Cathedral, and along Fifth Avenue to see the elaborately decorated storefronts. Along the way, hear about the history of holiday events in New York City, including the Rockefeller Center Christmas tree, from a private guide.
Bookable on TripAdvisor from $70 per person

Get into the season's spirit with this private holiday lights tour through New York City in a comfortable limousine. Your limo is stocked with a bottle of Champagne and soft drinks for the ride, and your guide takes you to some of the most holiday-themed areas of the city. See Brooklyn's Dyker Heights displays as well as other neighborhoods decked out in holiday cheer as well as famous Manhattan sights including Rockefeller Center.
Bookable on TripAdvisor from $399 per person

Enjoy Christmas Eve with bottomless mimosas and sights of New York's most popular attractions from the water on this brunch cruise. Along with a delicious brunch buffet of savory items and desserts, you can relax to the sound of jazz music played by a live band. During your cruise, keep your eyes peeled for the Brooklyn Bridge, the Statue of Liberty, the Woolworth Building, and the Empire State Building.
Bookable on TripAdvisor from $98 per person

About TripAdvisor
TripAdvisor, the world's largest travel site**, enables travelers to unleash the full potential of every trip. With over 570 million reviews and opinions covering the world's largest selection of travel listings worldwide -- covering 7.3 million accommodations, airlines, attractions, and restaurants -- TripAdvisor provides travelers with the wisdom of the crowds to help them decide where to stay, how to fly, what to do and where to eat. TripAdvisor also compares prices from more than 200 hotel booking sites so travelers can find the lowest price on the hotel that's right for them. TripAdvisor-branded sites are available in 49 markets, and are home to the world's largest travel community of 455 million average monthly unique visitors*, all looking to get the most out of every trip. TripAdvisor: Know better. Book better. Go better.

About 98°
98° has sold a staggering 10 million records, scored a chart-topping single, "Thank God I Found You," with Mariah Carey and Joe, and collaborated with their collective idol, Stevie Wonder, on "True to Your Heart," for the 1998 animated Disney film, Mulan. Their four-million-selling album, 98° and Rising (1998, Motown), spawned the top-5 favorites "Because of You," "I Do," and "The Hardest Thing," while 2000's Revelation (Universal Records), which sold two million copies, peaked at number 2 on the Billboard 200 and yielded a trio of hits, "Give Me Just One Night (Una Noche)," "My Everything" and "The Way You Want Me To."

Over the past 15 years, all four members have enjoyed other careers outside of music. Nick, recently appeared on Season 25 of ABC's Dancing with the Stars, has launched a successful solo music career and has starred on TV shows both as an actor (The WB's Charmed and One Tree Hill) and as a television host (VH-1's Big Morning Buzz Live, NBC's The Sing-Off). Drew was crowned season two winner of Dancing with the Stars, been on Broadway, and both brothers opened Lachey's Bar (A&E). Timmons joined members of Backstreet Boys and 'NSYNC for VH-1's Mission Man Band and Nick Carter's Sci-Fi feature, Dead Seven. Jeffre is involved in various media and cause related projects stemming from his foray into politics as a mayoral candidate of Cincinnati.