Travelers picked these San Francisco restaurants most often in 2017 (No. 5 is a surprise) 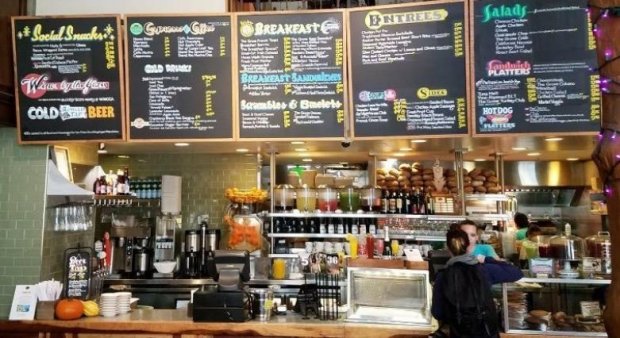 This restaurant, The Grove, came in first on TripAdvisor’s list of the 20 most frequently visited San Francisco restaurants in 2017. (Photo courtesy of TripAdvisor)

TripAdvisor is out with its list of the 20 San Francisco restaurants visited most often this year by both travelers and locals — and it’s an eclectic mix of the city’s classics, longtime hot spots and casual joints.

These eateries are based on decisions by TripAdvisor app users on where to dine, regardless of reviews on the site. “To glean these insights,” a spokeswoman said, “TripAdvisor studied check-ins via smartphone GPS and motion sensors to predict when and where anonymous users are visiting a spot or if they are just passing by.”

Coming in at No. 1 was the Yerba Buena location of The Grove, a family-owned comfort-food specialist with four locations in the city. Diners raved about the brunch — especially the benedicts and the rosemary hash browns — and the pastrami sandwich.

No. 2 was Town Hall, the popular Howard Street eatery with a regional American menu that leans heavily toward Southern classics, including fried chicken, jambalaya, ribs and pimento cheese.

The No. 3 most visited was the Slanted Door, the James Beard award-winning Vietnamese restaurant from chef-owner Charles Phan. Naturally, the visitors who did file TripAdvisor reviews found their way to the shaking beef on the menu.

Ranking at No. 4 and No. 5 on the list were the fall-back choices for all U.S. travelers: hamburgers. The Bay Area’s highly regarded Super Duper Burgers came in at fourth, and In-N-Out Burger came in fifth. (Leave it to tourists to find an In-N-Out in a city that we were positive didn’t have one! Alas, it’s in the Fisherman’s Wharf area at 333 Jefferson St. But we will give a pass to out-of-staters who have never tried this California classic.)

No. 6 on the list was a San Francisco icon, the Cliff House. Another legend, the House of Prime Rib, came in 12th.

The 20 Most Visited Restaurants by Travelers & Locals in San Francisco during 2017: